THE BLUEFLOWERS - "In Line with the Broken-Hearted"

Like British pop star V.V. Brown, Detroit's Blueflowers have a manifest affinity for infusing the tried-and-true chord progressions of late-'50s/early-'60s pop music with thoroughly modern soul, energy and purpose. But while Brown's style scales a Spector-esque wall of sound, the Blueflowers quietly opt for the picket fence.

With songs like "In Your Shadow" and "Hesitate", the band's sophomore album, In Line with the Broken-Hearted (2011), demonstrates an innate pop sensibility more closely aligned with The Crystals or Vogue-era Francoise Hardy than the precious navel-gazing of latter-day college radio. Just as a campfire draws faces from the surrounding darkness, so vocalist Kate Hinote provides a focal point for her band-mates, whose able instrumentation is relegated to a supporting role. And for good reason, for although Hinote’s vocals on occasion seem redundant, the woman can really sing.

Which is not to sell Tony Hamera (guitars), Erica Stephens (bass), David Johnson (acoustic guitar) and Jim Faulkner (drums) short. To be sure, their musical sense is impeccable, judiciously doling out organ signatures or clicking castanets at precisely the right moments, and to great effect.

Indeed, it all really falls into place for the album’s brightest moment, “Maybe”, a sugary tune at least as sweet as anything Phil Spector ever produced at the height of his game. The possibly sinister undertones of the lyrics render the tune that much more interesting: “Sorrow won’t protect you now / You’ve said just how you feel / If I can’t have the best of you / Then no one ever will.” Make no mistake: in a merit-based music industry there’d be no question of “Maybe” – this song would be multi-platinum.

With its clean (though not overdone) production, In Line with the Broken-Hearted shirks Detroit’s gritty urban landscape, casting the post-Aretha/Iggy/White Stripes city in a whole new musical light – one that finds melody on a prairie breeze somewhere on the darkest outskirts of town.

Posted by Eight-Stone Press at Friday, January 27, 2012 No comments:

I really did staple my fingertips together last night: 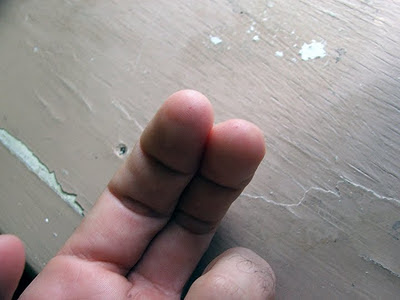 And while we're on the subject:

Posted by Eight-Stone Press at Thursday, January 26, 2012 No comments: 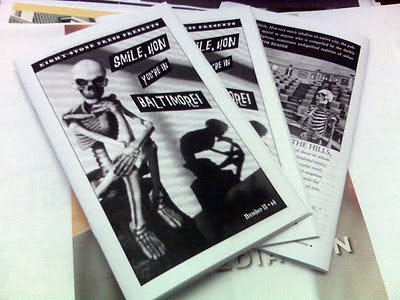 Smile, Hon, You're in Baltimore! No. 15 is back from the printer. It's a big bastard - 72 pages worth. And so long as I don't staple my fingers together again between now and tomorrow night, the show will go on...
Posted by Eight-Stone Press at Thursday, January 26, 2012 No comments:

At long last, the much-anticipated Smile, Hon, You're in Baltimore! No. 15 has gone to the printer. You can pre-order the issue on the Eight-Stone Press website. Or, better yet, pick up a copy this Friday night (1/27/12) at Atomic Books, when Smile, Hon teams up with best-selling travel guide The Dark Side of Disney for a joint release party of epically uncomfortable proportions! This free event begins at 7:00 p.m.
Posted by Eight-Stone Press at Monday, January 23, 2012 No comments:

The Shadows-meet-Joy Division. Meet Ennio Morricone. Meet David Lynch. And that’s just for starters. Indeed, The Lost Patrol’s sonic spaghetti Western-in-the-sky belies their New York roots. Like stars that only come forth well beyond city limits, the band’s influences are legion, yet the product they yield is as singular as a life-bearing planet.

The Lost Patrol’s third album in as many years, the beautifully produced Rocket Surgery (2011) carries the listener ever-deeper into a void untouched by the commercial mainstream. “A softer touch / A face so sweet / A lust for blood / Awakes the beast,” croons vocalist Mollie Israel on the album’s opener, “Dead or Alive”, a vintage tune propelled by the sleepy determination of Michael Williams’s four-four 12-string and lead guitarist Stephen Masucci’s sparkling reverb.

Rocket Surgery’s centerpiece is a star-dusted homage to ’50s torch songs called “This Road is Long”. Here, Israel more than makes good on the promise shown on earlier tracks like “Homecoming” (from the band’s 2008 release, Midnight Matinée), delivering what is perhaps her finest vocal performance yet. Coupled with dark lyrics ("You gave good guys a bad name...") and lush orchestration, "This Road is Long" suggests Skeeter Davis fronting The Moody Blues-from-under-someone-else's-bed.

But, unlike Scarlett Johansson and Josh Hartnett in The Black Dahlia, Israel isn’t merely playing dress-up. “Don’t look so sad / You don’t know / All that you have,” she pleads with the subject of “Little Girl” as Masucci’s guitar soars like wisdom of the ages.

To be sure, what distinguishes The Lost Patrol from much of the “shoegaze” genre is a brand of existential maturity that transcends kretek-infused apathy. As Israel notes on “Lost at Sea”, “When the strongest love / Wasn’t built to last / You know the brightest stars / Burn twice as fast.” Or, on “Not the Only One”, “You are the remedy / That sickens me.” Even a line like “I need you / To be mine / Dead or alive” acknowledges that, for better or worse, we ultimately have nothing if not each other. And for The Lost Patrol, that means everything.
Posted by Eight-Stone Press at Tuesday, January 10, 2012 No comments: 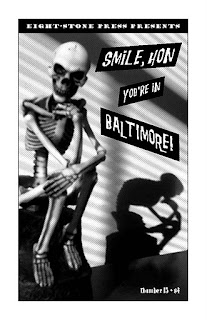