Congratulations to frequent Smile, Hon, You're in Baltimore! contributor Fernando Quijano III for receiving one of the annual William G. Baker Memorial Fund's 18 b-grants! Likewise, kudos to all other recipients of this year's Baker Artist Awards, particularly Shodekeh and ellen cherry, with both of whom I had the pleasure of judging the Literary Death Match last fall at the Baltimore Museum of Art. 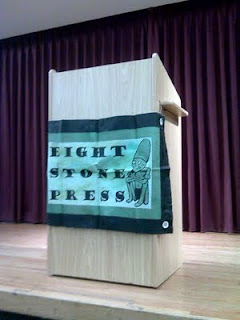 Thanks to all those who read and everyone in attendance for making the evening so special. Also, special thanks to: photographer and Smile, Hon contributor Bill Hughes for showing up to document the evening just a few hours before fleeing the country; Christophe Casamassima of the Towson Arts Collective and the staff of the Towson Library for suffering Smile, Hon with admirable grace; master thespian Alex Hewett for her dramatic interpretation of a Bazooka Joe comic; and especially Davida Gypsy Breier, without whose organization and support stark raving mad naked chaos would have reigned. 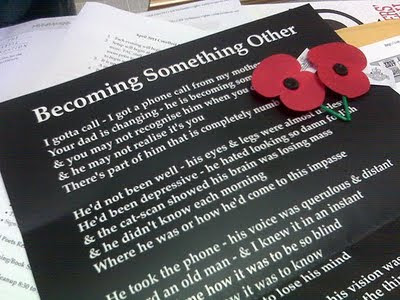 A Kiwi friend sent me a package containing a pair of remembrance poppies (in honor of Anzac Day on April 25) and a poster bearing a poem entitled “Becoming Something Other” in which the author, a man named Chris Knox, faces mortality through the lens of his own father’s failing health. Rendering the piece all the more poignant is the fact that, according to the author’s blurb, Knox – “a New Zealand musician, songwriter, cartoonist & critic” - himself suffered “a life-altering stroke” in June 2009. His friends and fans subsequently released a benefit album containing covers of Knox’s music to support him in his recovery.

This struck a particular chord for me as a good friend of mine suffered a massive stroke in late 2008 – two days after his 35th birthday – prior to which he had been in otherwise very good health. He was fortunate in that his mental capacities remained more or less fully intact. However, the physical ramifications are something else entirely, having included countless surgeries, hundreds of hours of physical therapy and the need to completely relearn such basic skills as walking, to name but a few.

We talk on the phone regularly, at least once every week or two. When I underwent chemotherapy for non-Hodgkin’s lymphoma in 2007, he always made a point of calling me the evening following my treatment. He’d ask how it all went, how it was all going, but mostly we talked bullshit: movies, music, stories from college (where we first met one strange and twisted evening after I nearly smacked him in the head with an ironing board). Bottom line, he recognized two things: 1) that quite often, at the end of the day, the last thing I wanted to talk about was cancer, and 2) just how much I truly valued the thought – the genuine friendship.

So, when I received word of his stroke, I had some firsthand idea of what awaited him, at least insofar as the reactions of others were concerned – the initial (and sincere) outpouring of support from well-wishers that would, in time, fade to a trickle once the “novelty” of the situation wore off and a good many of them redirected their attention to their own problems, their own lives. It’s nothing personal – that’s just how it goes.

Though not his only source of conversation by any measure, I’ve nevertheless made a point of talking with him as frequently as possible – bullshit stuff most of the time, more serious matters when they’re obviously weighing on him – being all too familiar with the statute of limitations on casual sympathy. We also share an acute awareness of our own mortality statistically beyond our years.

Still, things are a bit different this time around. When I was sick, he was a picture of health. But for however close to death I came, within a year my treatments were done, my hair was growing back and I was looking forward to making the most at this new lease on life. Today, four years later, I’m the healthiest I’ve been since high school, the only physical relics of my ordeal being a rather small biopsy scar and a tiny pill I take every morning – a very small price, indeed. That said I cannot begin to imagine the uncertainty he must face with the dawn of each new day.

It’s interesting – though I was not familiar with Knox or his music before opening this morning’s mail, such “life-altering” occurrences recognize no synthetic boundaries like Race, Religion, Nationality or Tax Bracket. We’re all fellow patients and, so long as we draw breath, we are all survivors.

So here’s to ya, Knox – good luck, and Godspeed (whatever the hell that means)...

Posted by Eight-Stone Press at Wednesday, April 13, 2011 No comments:

Smile, Hon, You're COMING TOGETHER!

Check out Baltimore-based smut writer (and frequent Smile, Hon, You're in Baltimore! contributor) Sommer Marsden's latest offering, Coming Together: With Sommer, now out from All Romance e-Books! What makes Coming Together particularly special (aside from just that) is that a) sales proceeds will benefit the Leukemia & Lymphoma Society, and b) the book includes a foreword by Smile, Hon editor (and lymphoma survivor) William P. Tandy. Learn more here.

And don't miss Marsden's bittersweet look at love and loss on Harford Road in "Dominic's Dead" in Smile, Hon, You're in Baltimore! No. 9 - an Editor's Pick! 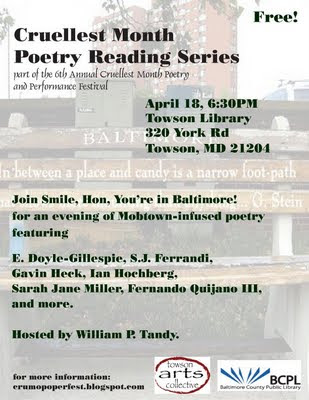 Posted by Eight-Stone Press at Tuesday, April 12, 2011 No comments:

Not even two weeks after its publication, Hon: Past, Present & Future has already found its way halfway around the world!

Of the new issue, New Zealand's Phantom Billstickers Ltd. says, "[S]ome mighty fine writing...all very close to the street/community and closely resembles that which is actually happening in that community. Imagine that? The voices are keen, fresh, and direct. We like it." Indeed, they like it enough to feature a give-away of five copies of the zine.

First up, don't miss what Baltimore Magazine has called "a can't miss event on the city's cultural scene" as CityLit Project partners with the Enoch Pratt Free Library for the eighth time to present the annual CityLit Festival, Baltimore's day-long celebration of literature, from 10:00 a.m. to 5:00 p.m. this Saturday, April 16, 2011, at the Pratt’s Central Branch in downtown Baltimore. Stop by the Eight-Stone Press table in the Literary Marketplace to pick up a copy of Hon: Past, Present & Future, back issues of Smile, Hon and more. This year's Festival headliners are Danielle Evans, Andrei Codrescu, and Jaimy Gordon. For more information, visit the event website.

BALTIMORE, Md. - The Feral Scribe ("Chronicles of a Wayfaring Journalist") offers an interesting outsider's perspective on Baltimore and its "hontroversy," including a handful of quotes from Hon: Past, Present & Future.

Also, Welcome to Baltimore, Hon's Bruce Goldfarb (author of the notorious "Hon Manifesto") offers his take on the new issue.

And finally, those who missed last week's edition of local arts program The Signal, featuring a discussion of Hon: Past, Present & Future with editor William P. Tandy, can now listen to the podcast. Rounding out the line-up:
-30-
Posted by Eight-Stone Press at Friday, April 08, 2011 1 comment: